Quarantines and social distancing measures cannot be our plan, say Amit Joshi and Michael Wade. Testing, isolating and normalizing are the way forward.

As the world gears up to restart in face of the COVID crisis, people, organizations and governments are facing unprecedented strains. No one really knows the long-term impact of the dominant current solution – social distancing – on anything from the economy to the mental wellbeing of the population. There are many recommendations and plans for how and when we should start ‘normalizing’ again and most of them hinge on two critical factors – acquiring herd immunity, or the availability of a vaccine.

Despite recent positive news about experimental vaccines developed in China and the U.K. that are starting to be tested in Brazil, it is still unlikely that one would be available for widespread usage within 12 months. Testing, manufacturing, distribution, and administration all take time.

So, for now, we need to get back to work without a vaccine

We propose a two-step approach to do this. Step one is to accurately measure the incidence of immunity within the population. Step two is to implement an innovative tracking and control system to limit further spread of the virus.

The first step is to assess COVID-19 immunity. Without a vaccine, and in the absence of any evidence of natural immunity, the only way for human beings to become immune to the virus today is to catch and survive it. (This is assuming that humans develop at least short-term immunity once they survive an infection.) Up to this point, national health care systems have quite rightly focused on testing and diagnosing the most vulnerable and/or symptomatic patients to ensure adequate treatment for those who need it most. Since there has been no broad-spectrum testing, we do not currently have a clear picture of how many people already have developed immunity to the virus.

If the percentage of immunity within the population is high enough, then very little further action is required. For COVID-19, we could hit this point with as little as 29% of the population[1], although the most likely figure is closer to 50%, and may be as high as 70%. At this level, it becomes very unlikely that someone who is not already immune will become infected because so much of the population is already immune and no longer spreading it to others – this is the so-called herd immunity.

The level of immunity in a population can be calculated by determining the percentage of people who are currently infected with the virus plus the percentage of people who have already recovered from the virus. Thus, two tests are needed: one test to determine the presence of the virus in a patient, plus another test that can show the presence of antibodies in recovered patients.

Scientists from The University Hospital in Bonn recently conducted a comprehensive test of residents of the small German town of Gangelt, and found that 2% of the tested population was infected with the virus and a further 14% had developed antibodies, indicating that they had recovered from it. They also calculated a fatality rate of 0.37%, which is much lower than the 2.3% German rate indicated by WHO data. The rates are different primarily because many people show few or no symptoms when they are infected with the virus, and thus are not captured by current testing. If we apply to 0.37% fatality rate to New York City, for example, then we can extrapolate from the 8,600 deaths that there are about 2.3 million infections, or about 30% of New York’s 8 million population.

Fortunately, we don’t actually have to test the whole population to get an accurate picture of the immunity level. Statistical theory has shown us that if a sample is random (a big if), then we can get a very accurate picture of the population by testing on a very small subset of it. So, if we want to get a sense of the COVID-19 immunity level for a population within an accuracy of plus or minus 1%, that will be correct 19 times out of 20, then we need to test 10,000 people. It doesn’t matter how large the population is – it could be one hundred thousand or one hundred million. As long as the sample is random, the we can accurately assess the immunity within the population.

Some parts of the world are starting to think more seriously about random testing. A study of almost 10,000 people in Iceland, a country with a population of 400,000, found that while the overall incidence of infection was low (less than 1%), about 50% of those who were infected were asymptomatic. In another case, blanket testing of the population of the village of Vo’Euganeo in northern Italy found that 50-75% of the population were asymptomatic. Los Angeles County has just embarked on a study to test the blood of 1,000 randomly selected residents, including those with no symptoms, to see if they have or had COVID-19. In Sweden, one of the hardest hit European countries, a random study of 1,000 people found the immunity rate to be 7.3%.

A study of 60,000 people conducted by the Carlos III Health Institute in Spain suggested only five per cent of the country's population has been infected, although the results varied considerable by region, with the hardest-hit Madrid area reporting an incidence rate of 11.3%. A study by the Pasteur Institute in France found that an average of 4.4 per cent of the population had been infected, with Paris area showing an incidence of just under 10%.

In a somewhat bizarre approach to determine COVID-19 incidence, the company Biobot Analytics, along with researchers from MIT, Harvard and Brigham and Women’s Hospital, tested sewage samples and found evidence of coronavirus far higher than expected. The data suggested that between 2,300 and 115,000 people were infected while official data on the catchment area of the wastewater treatment plant found that there were only 450 confirmed coronavirus cases.

So, for step one, we recommend random testing of 10,000 people repeated in different parts of the world to assess the current immunity rates within those populations. Fortunately, antibody tests are entering the market that are relatively inexpensive and extremely accurate. If the immunity level is above 50%, then those regions might consider ending any implemented lockdown measures, as they will be close to achieving a level of herd immunity that should provide adequate protection. Of course, special measures should still be introduced to protect the most vulnerable groups, but for the general population, this degree of herd immunity should provide adequate protection. If the immunity rate is lower than 50%, however, we recommend proceeding to step two.

The second step hinges on finding a cheap and accurate detection mechanism for COVID-19, combined with a test for antibodies / immunity. This will allow almost the entire world to resume normal activities. Here is how this would work.

Let us assume that we have a test for coronavirus that is basically free of cost. Even better, imagine a world where this test can be conducted over your smartphone (not practical yet, but bear with us!). This test will have a false negative rate close to zero, in exchange for a high false positive rate. Each morning, every one of us whips out our phone and tests one self. If the results are negative, we get a green screen (similar to the system implemented in China), which will allow us to go about our usual activities for that day.

If, on the other hand, it tests positive, then we go to the next step – comprehensive testing. Presumably this test is also cheap but not doable on a smartphone. Instead, we (carefully) make our way to the nearest hospital / urgent care / pharmacy / post office / police station / fire station / other testing center, where this test is conducted. The test itself will be either automated (kind of like taking your own blood pressure or blood sugar reading) or run by an army of individuals with very minimal training. If this test shows a negative result (no COVID-19), we go about our business as usual. If this test confirms the presence of COVID-19, then the experts administer a second test, for the presence of immunity. If this test shows that the patient is immune to the virus, they obtain an immunity certificate (which may last a fixed duration) and go about business as usual. All others, who tested positive for the virus and negative for immunity, quarantine themselves for 14 days, and then repeat the procedure. The sequence of steps has been captured in the figure below. 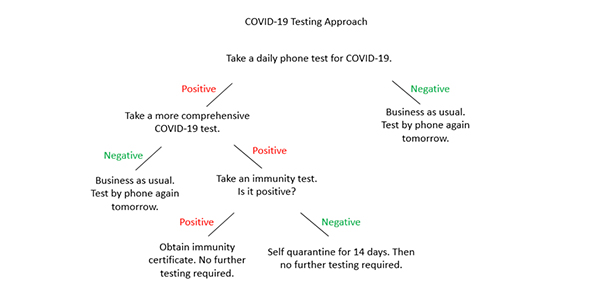 The assumptions made in the above scenarios are not far-fetched. While there exists no phone-based test today, we already have a test capable of results in 5 minutes. Chinese company Huami Corp, manufacturer of the Xiaomi fitness-tracking band, reviewed its data on 115,000 users in Wuhan and neighbouring areas from July 2017 to February 2020. It found an anomaly in sleeping heart rate in January of this year. Similar patterns were found in other Chinese cities coincident with the virus’s local spread. Huami is now developing an early-warning system to flag similar future anomalies and possibly pre-empt another major pandemic.

Similarly, there are tests for the presence of immunity toward the virus. Most importantly, once confirmed as negative and / or immune, an individual should be safe as long as they mix with other non-infected or immune people. We can mandate compulsory periodic testing every 2 weeks or so to try and catch people who carry the virus with no symptoms. Everyone with a negative reading gets a license to operate normally.

From a logistical perspective, this is doable. Assume that a trained individual or device (or a combination of the two) can conduct a test every 5 minutes. This amounts to about 80 tests per day, or 800 every 2 working weeks. A country like Switzerland, with a population of 8.5m will therefore need about 10,000 of these experts / devices. This country has about 35,000 doctors, and about 100,000 nurses, so getting to the 10,000 number should not be too hard.

While quarantines and social distancing have been the favored solutions thus far, they almost certainly cannot continue until we develop a vaccine. Focusing on testing – isolating – normalizing, is a much better bet for all of us.

Receive our IMD newsletter and our hand-picked publications on digital, big data & AI

Copyright © 2006-2022 IMD - International Institute for Management Development. All rights, including copyright, pertaining to the content of this website/publication/document are owned or controlled for these purposes by IMD, except when expressly stated otherwise. None of the materials provided on/in this website/publication/document may be used, reproduced or transmitted, in whole or in part, in any form or by any means, electronic or mechanical, including photocopying, recording or the use of any information storage and retrieval system, without permission in writing from IMD. To request such permission and for further inquiries, please contact IMD at [email protected] Where it is stated that copyright to any part of the IMD website/publication/document is held by a third party, requests for permission to copy, modify, translate, publish or otherwise make available such part must be addressed directly to the third party concerned.