All Publications
Criterion of the Month
Ref: COM-November-2017

How open an economy is affects its size and the level of competitiveness of the country. The free flow of goods and services, talent, and ideas benefits economies in many ways from making them more efficient to transferring know-how, to facilitating the adoption of new technologies. The generally optimistic move towards a more connected world, however, has been replaced recently by skepticism over the extent and allocation of these benefits among the citizens of any given country. Profound examples of this suspicion are the United Kingdom’s Brexit decision in the EU membership referendum and the USA’s election of a protectionist administration that is highly unconvinced of the current state of global trade. In this issue of the Criterion of the Month we will attempt to assess whether and how measures of openness have changed in the last decade.

This positive relationship between the levels of competitiveness and openness of an economy can be captured in the IMD World Competitiveness Center’s dataset. Two variables can be employed as indicators for openness. The first is the Trade-to-GDP criterion, a hard-data indicator which is affected, among other things, by the policies of a government regarding how ‘free’ the trade of a country is. The second derives from the Executive Opinion Survey, i.e. the response by mid- and upper-level managers to the question of whether “protectionism impairs the conduct of your business.” While the former criterion presents a measurable approximation, the latter provides the perception of market participants themselves about the openness of an economy. Graph 1 depicts this relationship. The first set of bars in the horizontal axis represents the twenty highest ranked economies with respect to competitiveness, followed by the second twenty and finally the remaining economies. 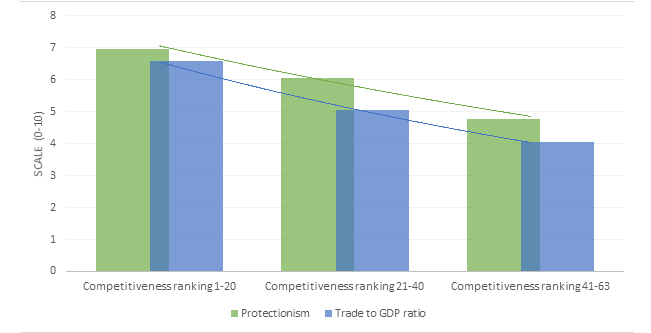 The next question is how the two proxies employed have involved in the last decade or so. Graph 2 describes how the Trade-to-GDP ratio has changed between 2007 and 2015, the latest year that we have data for, in a manner that captures the countries that have improved upon this figure. The horizontal axis provides the ratio for the year 2007, and the vertical axis the ratio for 2015. Countries that are above the 45° red line realized an increase in the reported ratio in 2015 compared to that of 2007. The graph on the left excludes the outliers and provides an easier graphical depiction of the evolution. Out of the 60 countries studied, 30 enjoy a lower Trade-to-GDP ratio in 2015. 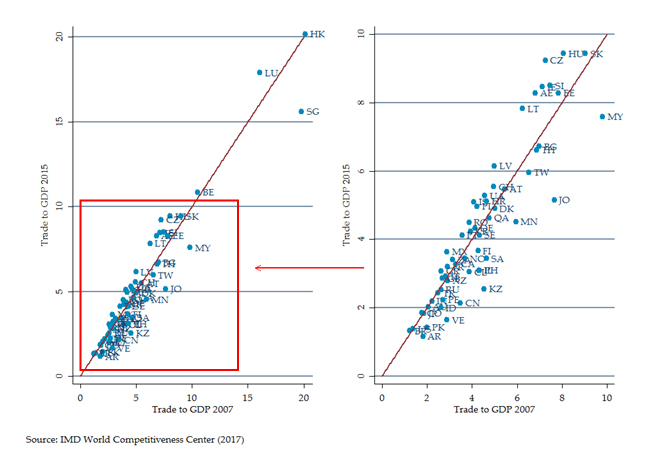 A similar picture is provided in examining the perceptions about protectionism in a country. Graph 3 captures this relationship. Executives in 23 out of the 55 countries that have been studied, feel that in 2017 the level of protectionism impairs their business more than in 2007.

Graph 3: Change in the perception of Protectionism between 2007 and 2017 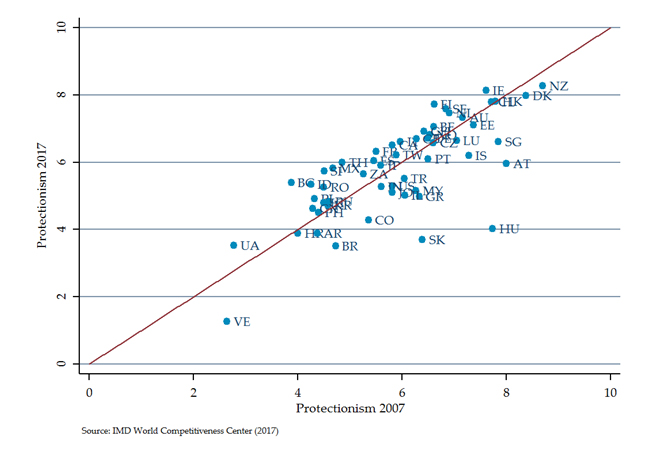 It is still early to evaluate the implications of the skepticism regarding the flow of goods and services around the world. The comparison of two measures of openness for the last decade do not seem promising for the time being. Will the outlook of movement of goods, people and ideas change in the future? Undoubtedly yes, we believe. Ongoing transformation is perceptible in many levels. The digital revolution defines the current status of and the future changes in various elements in the economy. There is, for instance, profound change in the openness around the world in the movement of ideas. How the openness with respect to trade is to be transformed remains an open question for further research.

Copyright © 2006-2023 IMD - International Institute for Management Development. All rights, including copyright, pertaining to the content of this website/publication/document are owned or controlled for these purposes by IMD, except when expressly stated otherwise. None of the materials provided on/in this website/publication/document may be used, reproduced or transmitted, in whole or in part, in any form or by any means, electronic or mechanical, including photocopying, recording or the use of any information storage and retrieval system, without permission in writing from IMD. To request such permission and for further inquiries, please contact IMD at [email protected] Where it is stated that copyright to any part of the IMD website/publication/document is held by a third party, requests for permission to copy, modify, translate, publish or otherwise make available such part must be addressed directly to the third party concerned.