The Nordic nation takes the lead for the first time in the IMD World Competitiveness Ranking, which also highlights how inflationary pressures are causing pressing socio-environmental concerns to take a backseat.

Denmark has reached the number one spot in the IMD World Competitiveness Ranking (WCR) for the first time in the ranking’s 34-year history.

“Denmark has played extremely aggressively on the sustainability front and benefits from being a small country in the European market,” Professor Arturo Bris, Director of the IMD World Competitiveness Center (WCC), which creates the ranking, explained. “Operating within that framework has allowed it to announce aggressive reductions.”

The Danish government has an ambitious target of cutting emissions by 70% in 10 years. The Scandinavian country’s trajectory in the WCR over the past five years has seen it move from 6th to 8th to 2nd to 3rd, then to 1st, respectively.

The 2022 WCR measured 63 economies’ economic competitiveness by analysing 163 pieces of hard data, taken from multiple sources and covering the 2021 period. It added its own survey responses to this; the majority of answers given in the first quarter of 2022 by senior executives. They were collected by the WCC’s 56 global partner institutes (ranging from chambers of commerce to government agencies and universities) and from some 2,000 IMD alumni.

All data was then fed into four factors (economic performance, government efficiency, business efficiency and infrastructure), each with sub-factors.

“Denmark's economic performance has risen sharply, and this is driven by increases in investment flows in the country, a contained rise in prices compared to other developed economies and by the strengthening of public finances with a reduction in public debt and government deficit,” said Marco Pistis, Research Specialist at the WCC.

The country’s improvements in health-related indicators – such as life expectancy at birth and the universal health coverage index – were also significant to its performance, he said. 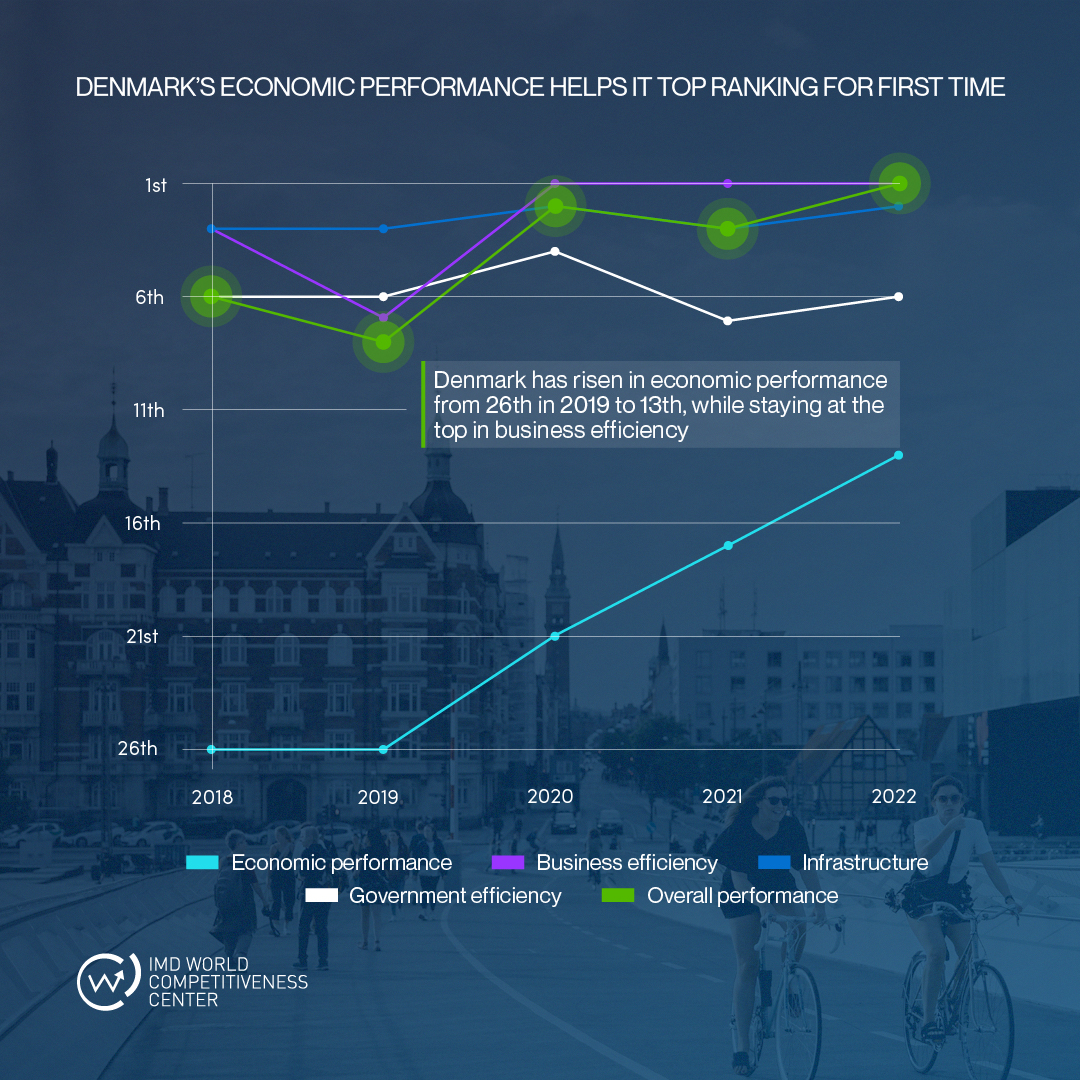 ‘From an economic point of view, the pandemic is over’

One major finding across economies is that inflationary pressures are having a greater impact on businesses – and therefore on the competitiveness of national economies – than concerns about greenhouse emissions and socio-economic disparities.

“From an economic point of view, the pandemic seems to be over. The big worry is inflation, at least in Europe,” said Bris.

“Globally speaking, those challenges having the biggest impact on the competitiveness of nations – to a greater or lesser degree – include differing national policies to address COVID (a ‘zero-tolerance COVID’ policy versus a ‘moving on from COVID’ one) and the invasion of Ukraine by Russia,” added WCC Chief Economist Christos Cabolis.

Elsewhere in the ranking, Switzerland came in 2nd (it was 1st in 2021), Singapore was 3rd (up from 5th) and Sweden fell two places to 4th.

Croatia was this year’s greatest improver, leaping 18 places in economic performance. The WCC said its strong economic rebound from the most acute phase of the COVID-19 pandemic played a key part, as did the recovery of its tourism sector.

Many survey-based indicators assessing business practices and confidence in Croatia displayed progress too, highlighting a general increase in business confidence in the country. The WCC said they believed the Balkan country’s upcoming accession to the eurozone in 2023 may be behind this.

Russia and Ukraine were not assessed in this year’s edition due to the limited reliability of data collected, while Bahrain’s inaugural appearance saw it come 30th.

Reset for sustainable and inclusive growth

‘Singapore is economically competitive. To maintain its position, it needs to invest more in developing transformational leaders’

‘Singapore is economically competitive. To maintain its position, it needs to invest more in developing transformational leaders’ Singapore’s senior executives are well-positioned to adapt to today’s...

Leaders: pay attention to what really motivates your workers

Workers today are increasingly motivated by high quality of life, flexible working, and opportunities to train on the job, whereas previously, remuneration was the driving force behind their desire to...

Smart cities need to be heading in a human-centric, digitally inclusive direction or the tech won’t pay off, panelists agree