75th anniversary gala: I feel like I am standing on the shoulders of giants

IMD celebrates the pioneers who helped transform it into one of the world’s best institutions for executive education at a heart-warming gala.

Michel Demaré, who has served in top leadership roles at some of the world’s biggest companies, recalled feeling humbled the first time he set foot on IMD’s campus in Lausanne.

“I still remember how impressed I was, to finally visit this legendary education site and interact with famous professors,” said Demaré, now Chairman of IMD’s Foundation and Supervisory boards, as he addressed a distinguished audience of alumni and faculty at the 75th anniversary gala.

“Going back by train to Zurich, I almost felt like I was a different person. This is how strongly I felt about the reputation of IMD and what it still means to me today,” he added.

Since its founding on 5 November 1946 in Geneva by Canadian aluminium producer Alcan (now Rio Tinto Alcan), IMD has shaped the lives of many leaders who have gone on in turn to transform organizations and society.

“You enter naive, and you exit with your eyes wide open to the world,” said Karen Huebscher (MBA 2000), Chief Executive of Solvias AG, during the gala dinner for 140 guests.

Always evolving, IMD has unfolded across different locations and undergone several name changes during its 75-year history, but it still seeks to honor the pioneering spirit instilled by its founders.

It started life as the Centre Études Industrielles (CEI) in Geneva in 1946 and was later renamed the International Management Institute (IMI). A decade later, Nestlé established the Institut pour l'Etude des Méthodes de Direction de l'Entreprise (IMEDE) in Lausanne and in 1990, the two institutions merged to create IMD in its current form.

One of the key architects of IMD since the merger was Peter Lorange, who served as President between 1993 and 2008, and played a significant role in shaping the campus by commissioning most of the new buildings, but also by expanding its reach and by quadrupling revenues.

Describing himself as “standing on the shoulders of giants,” current IMD President Jean-François Manzoni lauded Lorange’s legacy in an emotional speech.

“Every time I walked into his office, I entered six feet tall and left seven feet tall” Manzoni recalled as he named Lorange IMD Honorary President. 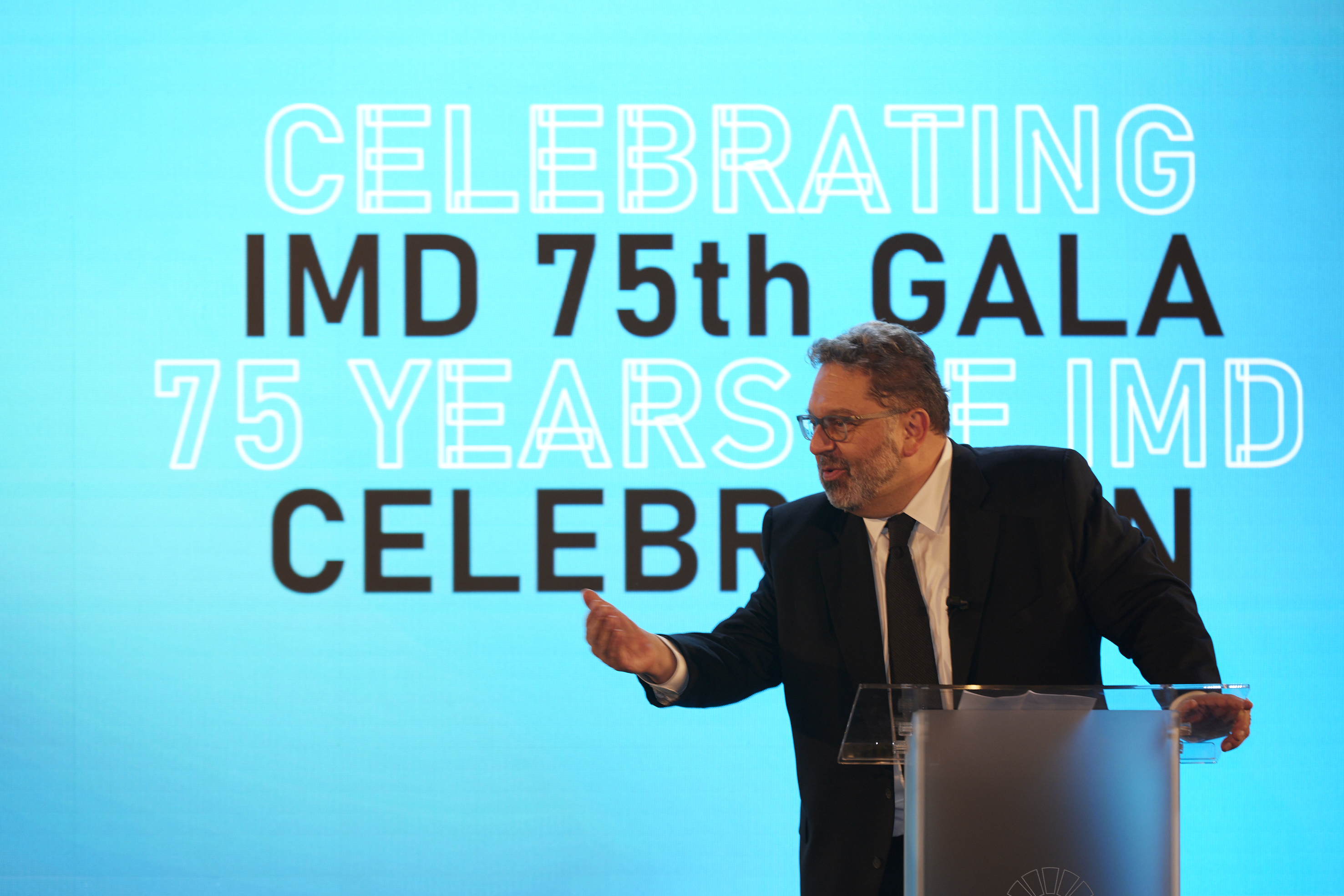 Among IMD’s pioneering efforts over the past 75 years was contributing to the world of family business, where it was one of the first academic organizations to offer dedicated programs to business-owning families, said Peter Vogel, director of the IMD Global Family Business Center. To build on this global legacy, IMD is establishing a Peter Lorange Chair.

“I have come to believe that family business is absolutely critical,” said Lorange.

The winner of the 2021 Global Family Business Award, now in its 26th year, is Danish water technology company Grundfos, which combines world class innovation with exemplary governance and a mission to tackle the world’s water problems.

“Thank you for challenging us to be the best version of ourselves,” said Poul Due Jensen, Grundfos CEO and third generation family member. “This award makes us strive to do even more, even better, and provide a better world than what we took over,” he added.

This was a message echoed by Manzoni, who stressed the need for leaders who have the vision, the inspiration, and courage to lead organizations in a more sustainable direction.

“We do need a more prosperous world, yes. But we need this prosperity to be generated in a way that is shared to a sufficient extent and that will leave a viable world to our children,” he said.

IMD’s pioneering spirit and strong purpose to challenge what is and inspire what could be helped anchor the institution during the turbulent times wrought by the COVID crisis over the past 18 months, said Demaré.

“We did not put our head in the sand, we didn’t run for cover. We took risks,” he said.

This year some 60% of revenues will be generated by technology-mediated instruction compared with just 10% in 2019, he noted.

“IMD 2.0 was born, on an accelerated path, and will allow us to keep or even strengthen our position at the top tier of this newly defined world of education.”

Even as IMD evolves and adapts to meet those challenges, attendees at the gala spoke warmly of a strong and vibrant community whose purpose remains unchanged.

“Of course, the buildings have changed, they are bigger and grander,” said Liselott Kilaas, Chairperson of the Board of Directors of Coala Life, Implantica AG and Avonova AB, who completed her MBA at IMEDE in 1987. “But the DNA of IMD is still there.”

Reset for sustainable and inclusive growth

Neither Semira Gonseth Nusslé nor Nayeli Schmutz had ever planned to become entrepreneurs. Both medical doctors by training, their passions led them to found startups that could revolutionize their...

Carvajal, a leading diversified, family-owned Colombia-based company, has been selected as the winner of the 2022 IMD Global Family Business Award. Established in 1904 by Manuel Carvajal Valencia and...

The future of management education: the impact of hybrid learning

As the American industrialist and business magnate Henry Ford once said, “Anyone who stops learning is old, whether at twenty or eighty. Anyone who keeps learning stays young.” Staying true to this...